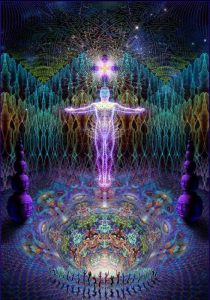 This session must be done “hands on” in person. Involves approximately 15 hours to open all the channels gracefully.

Pleiadian Lightwork is the name given to the healing, spiritual activation, and ascension techniques which are part of the Dolphin Star Temple Mystery School.

This mystery school system is essentially the resurrection and con-temporization of the ancient Lemurian, Atlantean, and Egyptian systems. Its chief purpose is that of assisting in bringing about the second coming of Christ en masse, when a minimum of 144,000 humans attain to Christ consciousness on Earth.

This will trigger an enlightenment wave through the Earth and all her people, and planetary ascension. The time of the great planetary spiritual awakening is now. By learning to live impeccably, anchoring Higher Self in our bodies, restoring our souls, and aligning multidimensionally with the Great Central Sun, the Source of All That Is, we shall be victorious! (quoted from Amorah Quan Yin’s Web Site)

KA may be described as the electrical, light-body circuitry that exists identically and simultaneously in the third through sixth dimensions and that ultimately functions in all those dimensions to anchor and contain your Christed Presence in form. It is the interface between spirit, dimension and form that allows us to move through dimensions in our highest evolved “physical” form.

There is a series of 16 pairs of Ka channels that I will focus on to bring your own Ka energy into them to activate them as fully as possible. This involves a “hands on” clearing and activation procedure that takes approximately 15 hours to open all the channels gracefully. This is a very beautiful and intimate process as density is released and more and more of your Higher Self energy begins to flow through your physical body. Other hands on energy work may be called for and utilized during this process.

Adama was in one of the very first Pleiadian Lightwork Intensives that Amorah taught in 1995 before her very first book was published, The Pleidian Workbook: Awakening Your Divine Ka in December of 1995. He went on to become the first student to complete all the requirements to receive Instructors Certification to teach Pleiadian Lightwork Levels 1, 2 and 3 as well as Full Sensory Perception 1, 2 and 3 in 1998. This was an approximately 3 year Apprenticeship program that involved taking each of the 6 classes three times each at various levels of increasing competency and skill levels, including teaching and supervision. The Pleiadian Lightwork Intensive Level 1’s were 30 days of trainings to teach and open all the Ka Channels. The Full Sensory Perception classes worked in conjunction with each of the Pleiadian Lightwork Intensives and were approximately 15 days of training for each level. He was also certified in Dolphin Brain Repatterning and Advanced Pleidian Lightwork by Amorah.

Adama has taught Pleiadian Lightwork Intensives in Europe, Canada and the United States. He has been opening Ka Channels hands on since 1995 all over the world including North America, Europe, Australia and Japan. He was a founding member of and on the Board of Directors of the Dolphin Star Temple. This is 27 years as of 2022 and Adama has achieved a Mastery of the techniques second to none. Adama has also been certified in advanced levels of Pleiadian Lightwork by Amorah through special trainings she gave before her passing in 2013.

After your payment is processed you will receive a confirmation email with a link to complete the personal information form for your session. Adama will then contact you to schedule a time.

Payment by PayPal or your credit card.  Amounts shown are in USD.

It’s been several months now since session, and I would like to give you an overview of not only my experience of the session, but what has been happening since.

The initial session was, of course, one of the most amazing energetic experiences of my life. I actually felt so very much in my body as you worked. Once you finished with an area, there was definitely a sensation of openness and lightness. As the session ended, my entire body was subtly vibrating…and the idea of dancing wildly was almost irresistible.

That session certainly caused something to shift in my perception of life. Going into the session, I’d felt trapped and suffocated by my life circumstances, unable to see a way out of several unhealthy patterns of thought. Much like a mouse in a maze, I continually felt I was running in dead-ended circles, working ridiculously hard for crumbs of moldy cheese. What a miserable life!

Within a day of our session, all sorts of options began opening up in my life. Options for a new career. Options for new ways of thinking. Options for new, like-minded friends and colleagues. Options for climbing over the walls of the maze into a field of dreams, so to speak.

The work you did with me started a metamorphosis within that continues to this day. So many old patterns and limiting beliefs have come up for healing over these last few months. It hasn’t always been comfortable, but deep cleansing and releasing like this is absolutely essential for any kind of spiritual growth, and I wouldn’t change a thing. My life is so much richer now, so filled with beauty and mystery and excitement. And it all started with your session.

With all my heart I thank you.